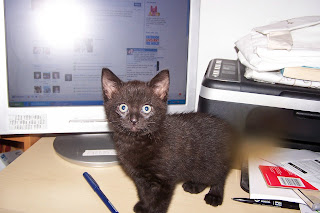 Meet Tabitha, she is six weeks old. Isn't she adorable she is my new best friend. She is a very dark tabby short haired she is so tiny she fits in the palm of my hand.
Posted by Susan at 11:11 3 comments:

And the winner is:

ANNETTE. Congratulations Annette I found your comment the funniest, can you please e-mail me you address so I can pop your prize in the post. I would like to thank all my lovely friends for taking part in this little bit of fun all your comments made me laugh. I am truly blessed to have such wonderful people in my life. Hello and welcome Trillian to my blog.
Posted by Susan at 10:46 3 comments:

Humour me and win a prize: 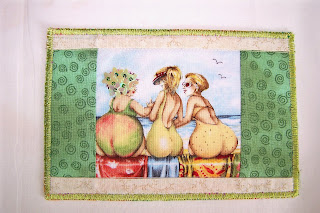 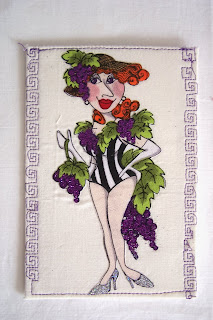 I received this postcard today from Melva in Seattle, isn't she a delightful creature. It appears that I had signed up for the humour swap quite sometime ago. I was suppose to send a card to Lisa. I felt really bad at forgetting, so this afternoon I made Lisa a quick postcard. The fabric I chose always makes me smile (because I can relate to the big bottom in the swimsuit lol). I think the fabric itself is funny but I decided to write a humorous caption on the back. NOW! its over to you guys. Please leave me a message telling me what you think the ladies are saying to one another. The one who sends the funniest will win a prize. Good luck xxxx
Posted by Susan at 17:11 7 comments: 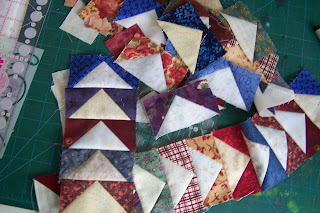 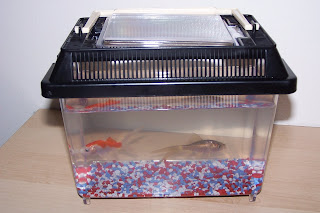 Meet South and Port my two new friends. Yesterday I went to Southport with my Sister, brother-in-law, niece, brother and nephew. We had a lovely picnic lunch on the Pier, then it was off to what is left of the fun fair. Paige and Harvey were having a go at a win a prize every time stall and we all laughed when they both won a goldfish. Paige asked me if I would like a gold fish, i said no that i did not have a gold fish bowl to put it in, but it turned out that the woman also sold little fish tanks. Paige bought me the fish tank and then went on to win me two fish. They are making themselves at home in my bedroom. Later at home I needed to get on with some serious sewing. I need to make a 176 flying geese for my outer border on my country album quilt. I think I've made about 70 so far.
Posted by Susan at 08:50 2 comments: 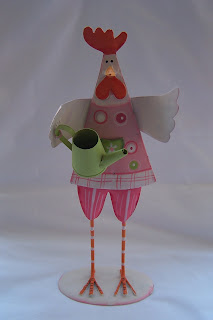 Hello everyone, sorry have not blogged for quiet some time I have been nursing a very broken heart. To get back into my blog I would like to introduce my new friend Chook. He has met Windy and they are getting along famously side by side on the windowsill in my sewing room. I bought Chook a couple of weeks ago whilst on a weekend break in Bala. It was so nice to get away for a couple of days just to chill out and relax. Chook was not the only thing I came home with? I came home with lots of insect bites and my body decided to have a bad reaction to what ever had bit me. Emergency doctors appointment and some strong anti histamines and I was out for the count for the next two days. OOOoo the Gods have a wicked sense of humour were I'm concerned lol.
Posted by Susan at 09:15 5 comments: