It won't go any further: 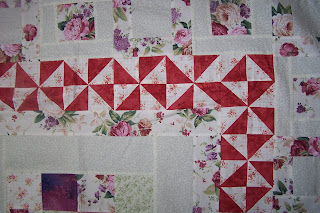 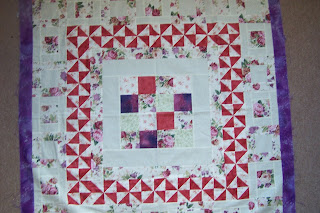 This is my first attempt at Janet's medallion quilt. This was made two years ago. The fabrics where purchased using the very generous voucher I received for my 40th birthday from the Liverbirds. I have attempted several times since to complete this top but to no avail. I just stare and stare at it and though I will myself to get stuck in, I can not seem to go any further. I took it out a few days ago (after another whoops with my court house steps, don't ask)in the hope of finishing it but it was not mean't to be. I realised this was as far as it was ever going to go, so I folded it up and put it away. At this point I felt a bit guilty for not having a completed medallion quilt, after all the effort Janet had gone to designing the quilt. I raided my stash, picking a new colour scheme and I have been working very hard on my second medallion quilt. I only have one more bored to make and my top will be completed.
Posted by Susan at 08:39 No comments: 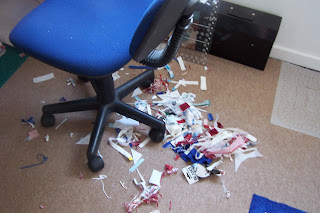 You can not make an omelette without breaking eggs, well I can not make a quilt without making as mess. This picture is my sewing room floor last night after a day of sewing. The thing is, I have a bin right next to me? Heaven only knows how I manage to get more on the floor than in the bin. I am currently working on two projects but neither one is finished,please be patient with me for not blogging. My love and prayers to all my lovely friends who read and support my blog.
Posted by Susan at 08:33 2 comments: 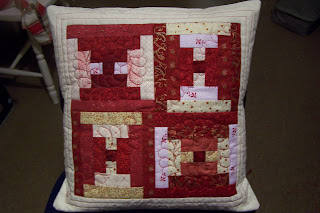 A couple of weeks ago I managed to get stuck into part two of Janet's Stripy log cabin and appliqué quilt. I had to make 16 court house steps blocks. The blocks when finished should have measured 7 1/2 inches. Whoops! mine only measured 7". I thought I had made six blocks but luckily, I had only made four when I realised the error. Now then! What to do with these lovely court house steps blocks????? Of course simple, make a cushion and what a perfect project to practise Sue Nickels free motion feathers. (Believe me, I need lots of practise) The colours go well with the colour scheme of my living room and it is now on my sofa. I think it turned out pretty well considering it was a whoops a daisy.
Posted by Susan at 22:19 3 comments:

An opportunity not to be missed: 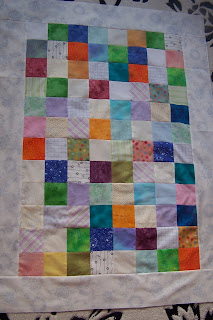 In January I was advised by my GP to visit a local women's centre called the Swan centre. Its purpose is to cater for woman who have health problems. It was a big step for me to pluck up the courage and go to the centre. I was met by a lovely lady named Barbara who explained what the centre was all about and what it had to offer. Barbara made me feel very welcome and I returned the following day to attend a reading class. It was a bit like jackanory. A lady named Iralie read us a story whilst you made yourself comfortable on big soft sofas and chairs. It was so relaxing I nearly fell asleep. Since then I have joined the Art class on a Monday morning and I have met such lovely people. I also tried to join the sewing group but it was not what it appeared to be, so I did not return. However last Monday, two ladies in the art class asked me if I would return to the sewing group and teach them how to make a quilt. Well now, how could I refuse. I took along my quilts the following Thursday for some show and tell. I received such a positive response, they asked me to design a simple project so they could learn the basic. I decided on squares over papers to make a small child's quilt using scraps of fabric. I have run my one up over the last two days and to night I plan on layering it. Hopefully I will be able to start to quilt it tomorrow. Either way it has to be ready to show the ladies what they are going to make on Thursday. I hope it will meet with their approval:
Posted by Susan at 19:42 2 comments: 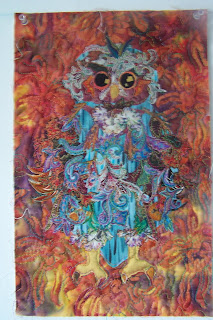 Firstly let me apologise for my absence life has been a bit busy. Yesterday was our area day and what a great day it turned out to be. We had a fantastic speaker, Liz Wall who wowed us all with her work and how she had gone on to develop her individual style. In the afternoon Liz gave a work shop which was also a great success. Liz's work is amazing and a couple of years ago I was privileged to do one of her work shops (The Owl). Liz provided a kit and in the kit was the basic owl shape which we bond-a-webbed to the back ground fabric. Next she placed a big box of various fabrics on the table and from this box we chose pieces of fabric and fussy cut them to make the owls feathers. Each owl was so very different and it was a most enjoyable workshop. Liz's technique stayed with me and I used it with her permission to make my Window challenge for the Christmas Party that same year. I adore my owl and he proudly hangs up in my sewing room, keeping a watchful eye over me. After all he is a wise old bird.
Posted by Susan at 07:48 5 comments: