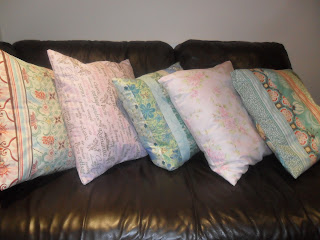 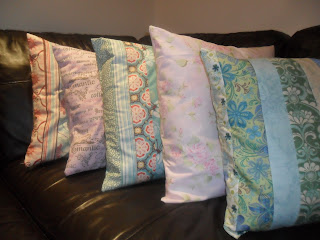 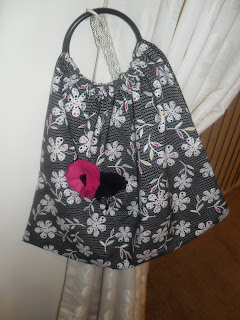 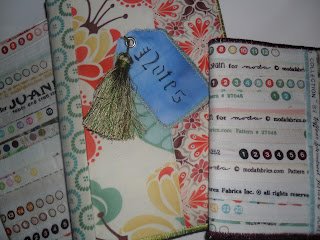 Where does the time go? I have been so busy with college the days and weeks are just rolling into one. I have however managed a little bit of sewing. I have made some cushion using a moda scrap bag I bought from Dot in November. The design is called Fandango, designed by Kate Spain and comes in a lovely fresh colour way. I used every piece of the scrap bag even the selvage edges and made three journal covers. The bag and two of the cushions are made using fabrics from my stash. I have put two felt flowers on the bag but these can come off and be used as broaches.
Posted by Susan at 22:41 3 comments:

I know I have said this in the past but I am truly blessed to be a member of the Liverbirds. On Wednesday my very generous friend Janet brought lots and lots and I mean lots of fabric for a raffle. I won two very generous bundles, however there where 22 of us and we all won two bundles (see what I mean by lots).  If that was not enough my lovely friend Hilary gave me a box of water colour pencils. I adore water coloured pencils, I use them in my sketch books quite a bit. Today I decided to give my newly acquired pencils a try out and they are just lovely to draw with. They are very smooth and make lovely marks on the paper. I have also tryed them out on fabric and they work a treat. As you can see I am still working on the City project, the third picture is a mono print I have created which I hope to layer and quilt tomorrow.
Posted by Susan at 21:35 3 comments: 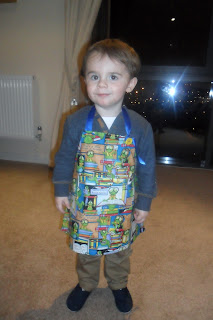 Yesterday my little man came to visit.  He is growing up so fast he is two now, its scary. When he comes here he loves to sit at the table in my sewing room and we paint or draw.  Yesterday he decided he wanted to paint. Out came the paper and paints and we painted flowers, butterflies, trees, cars and cats. All of a sudden Cole said to me "Nanny I've got no bib on", I asked him why he needed a bib and he said so he didn't get paint on his clothes. I went to the kitchen and got him my Susan apron. Apron on and we continued to paint. Then he stopped again and said Nanny put your bib on, good job I had two aprons, I put my liverbirds apron on. Again we began painting but something must have been not quite right in his little mind because he then informed me that his bib was to big. I realised we would not be able to paint until a special bib was made just for him. I got out the fabrics that have pictures on (very limited choice) and asked him which fabric he liked. After a little bit of thought and a good old nosey in the draw he picked the fabric with the book worm on. I got a large piece of paper and told him to lie on it whilst I traced his torso. I made a quick apron pattern for his size and he helped by carefully passing me pins from the pin cushion and then sticking them back in. He also helped by cutting the thread after I had sewed each hem.  I then got the button jar down and told him to find a big button which he did. I sewed the button in place and Cole's painting bib was finished. He loved it and we where finally able to get on with our painting.  You can not see from the photo but I even managed to put a pocket in the front and Cole was delighted with it and decided to put his paint brush in it.
Posted by Susan at 15:07 2 comments:


I have been working really hard today doing lots of research and experimenting for the new project "the city".  I have fell in love with the stone heads on the bombed out church. I have took lots of photos of various buildings in Liverpool city centre and these have given me lots of inspiration. I have decided that my final piece will be wearing the city. I now have to find away of transferring the images on to fabric. So far the best way t do this is by making my own funky foam stamps.  I thought I would share my printed fabric so far. I hope to eventually make a garment from my printed fabric but that's in the future as I need to experiment further.
Posted by Susan at 14:56 No comments:


I have been shut away in my sewing room all day today in an attempt to get on with some work. I started the day by cutting out and organising the photos I had taken and printed of Liverpool city centre. Next I began to put them into a new sketch book for the city project. It is very early days so I do not yet know where this project will take me . Today I looked at the ornate patterns on parts of the buildings in some of the photos.  A few hours later, I felt I needed a break so I decided to crack on with my wall hanging.  However, this took complete hold of me and several hours later I had finished the first panel as well as doing quite a considerable amount of work on the second panel.  I feel I have done enough for one day so the couch, a drink, a big bar of chocolate and a chic flick will end the day off nicely.
Posted by Susan at 20:55 5 comments: 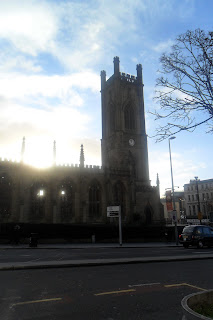 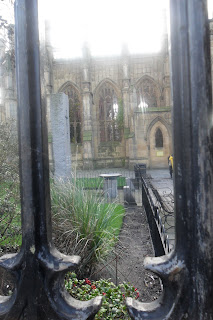 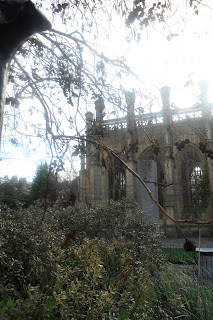 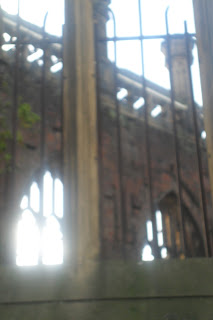 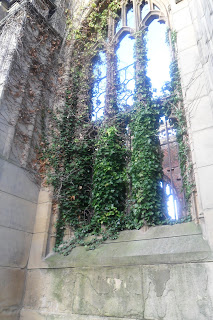 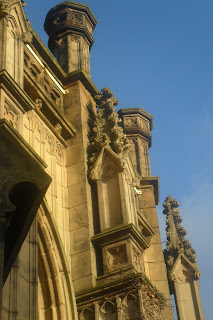 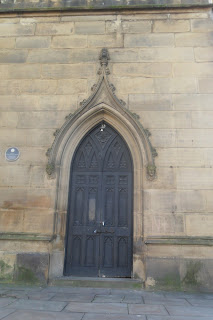 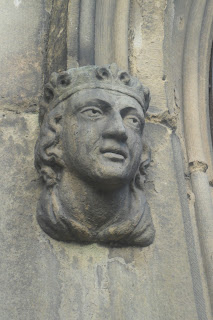 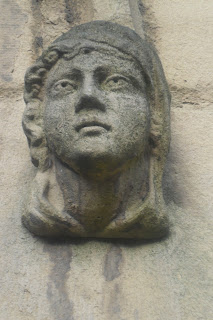 The new project in college is the City. So with my trusted camera I  set off to see what images I could capture to begin my research. My first port of call on my walk was St Luke's church better known as the bombed out church. Designed in 1802 by John Foster senior and completed in 1831 by his son John Foster junior. It is notable for its large number of male and female heads that cover the building.  Sadly the church was bombed and suffered terrible damage during the second world war in 1941. It was never repaired but it was purchased, with its garden, by the city council to be used as a place of rest and tranquillity after the war. I pass the bombed out church twice a day but I had never stepped foot inside its grounds until yesterday.  I can honestly say it took my breath away, it truly is a place of beauty. Even on a cold and windy day the sun sneaked through a cloud and shone down on one side of the church and it looked like it was made of gold. What treasures we have right there in plain sight yet we can quite often fail to see them.
Posted by Susan at 21:15 5 comments:

A few days ago I decided I needed to do some sewing. I went into my sewing room and stood staring at the fabric stash but I felt so lost and over whelmed. I didn't have a clue what I wanted to make. I then spent some time looking through books and magazines for inspiration but nothing inspired me. In the end I started a baby quilt for my nephew and his partner who are expecting a little girl in March. However this was soon abandoned as I had a brain wave on how to do the water on my Aquarius wall hanging. I have to say the idea came after watching a DMTV show in which Linda Kemshall paints the glue side of bondaweb. I have been thinking about how I was going to achieve the water on the wall hanging for months. Well once I started the water just flowed and I was really pleased with myself.  The end was insight to finishing my little wall hanging until I measured it and discovered it was 4" to small to enter the small wall hanging category. NOOOOOOOOOOOO! I was not going to be defeated so off to abikahn where I bought some white lining. Out came the fabric paints and dyes and lots of scribbling in the sketch book and I have designed two boarders. I will add these boarders using the quilt as you go method. PHEW! My wall hanging is saved and God willing will be entered into Harrogate this year.
Posted by Susan at 10:11 2 comments: