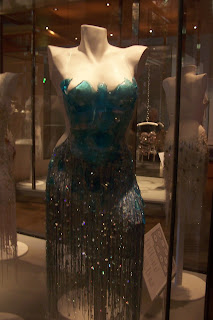 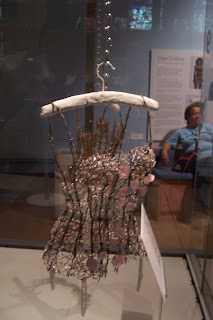 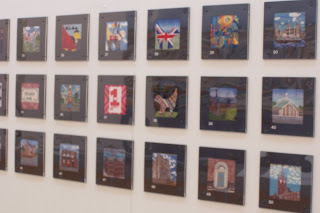 I was experiencing quite a low day yesterday so decided to take a trip into Liverpool city centre. I remembered a friend telling me there was a sneak preview of the Liverpool 08 tapestry Project at the Walker Art Gallery. I apologise the picture is not that good, you were not allowed to take photos so it was a bit of a sneaky shot. The work in these little pieces of art are amazing. My friend Judith has a piece of work in the tapestry in remembrance of her aunt who was a prolific member of the Embroiders Guild. The other two Pictures are from another exhibition in the Walker "Dare to wear" Glass dresses by Diana Dias-Leao. It is a fabulous exhibition, her work is stunning, I only managed to get two sneaky photos. There are about 10 dresses on show and there are photographs of models actually wearing one or two of the displayed dresses. As they are made of glass and wire I could imagine there not comfortable to wear but oh my they are so beautiful. On my way out i picked up a leaflet exhibitions and events guide and discovered another exhibition that is on in Sudley House in Aighburth. this exhibition is titled "Hitched" and is showing wedding garments from Victorian times to present day. It runs till spring 2011 so I go and see this one when I get back from my jollys.
Posted by Susan at 08:25 2 comments: You know the saying time flys, well I think it is concording for me at the moment because there is never enough hours in the day. A couple of weeks ago Michaela informed me she did not have a christening shawl. I was not able to buy her one, I tried lots of baby shops but to no avail. The christening was only a couple of weeks away so it was short notice to find someone to make me one for her. There was only one thing left to do. Ye,s you guessed it, make one myself. I can only do basic crochet and the shawl as you can see is very simple but it has taken up my nights and taken me away from the sewing machine. It is a surprise as Michaela does not know I have made it. The christening is this Sunday so I plan to give it to her this afternoon, fingers crossed she likes it.
Posted by Susan at 08:37 2 comments: 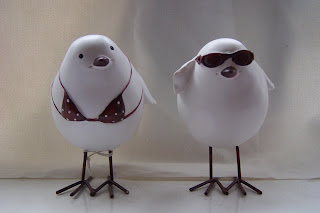 Meet Gert and Bert who have landed on the sewing room windowsill next to Windy and Chook. For those of you who really know me! will know that I do NOT do ornaments, clutter or tack. However, there are times when little things catch my eye and I think yes I could live with that. Now Bert and Gert caught my eye whilst I was out a few weeks ago with a friend and they made me laugh. For this reason my friend bought me the pair as a little gift. I knew they would be at home on the sewing room windowsill and every-time I look at them they bring a smile to my lips. Maybe the moral of this story is sometimes(but only sometimes)a bit of tack does you good.
Posted by Susan at 08:50 1 comment: 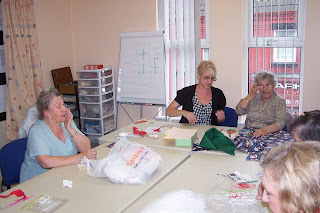 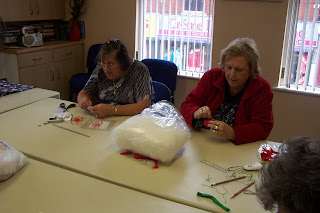 What a great success the felt Christmas Stockings were. As you can see from the photos everybody was busily working away and they all finished with in the two hours. phew!!!! It was a really quick project to teach. Now maybe I can get back to my stripy log cabin or Jacobs ladder quilt??????
Posted by Susan at 18:19 1 comment: 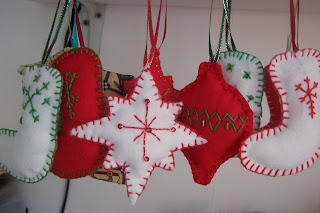 Last Thursday I told the delightful ladies from the Swan Group that this week we would make a Christmas decoration. I thought maybe we could make an eight pointed star using lovely Christmas fabric. After several hours of me struggling to make one that idea was abandoned. My next bright idea was a cathedral window Christmas decoration. Scrap idea number two far to complex. I knew it had to be something relatively simple and quick to make as we only have two hours in which to make it. Several hours of my precious sewing day had passed and still no further on with an idea for Thursday. Franticly looking through books and magazines then I remembered Janet's delightful little felt stocking she made me last Christmas. Eureka!!!! I hope you don't mind me stealing your idea Janet, it is the ideal project. I have added a star and a bauble shape for a bit of variety.
Posted by Susan at 20:38 3 comments: 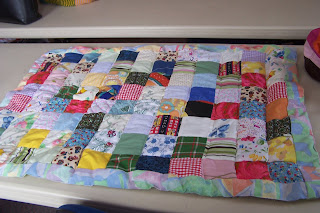 The photo above is the very first finished cot quilt from the delightful ladies of the swan sewing group. Pat has worked very hard on her quilt and I think she has done a fabulous job. I feel quite humble that these lovely ladies asked me to teach them patchwork and quilting because I am not a teacher. Seeing Pats quilt yesterday and the smile on her face and that of the others was so rewarding. I came home bit the bullet and rand the WEA (Workers education association0 and put my name down for the next petals course Teaching qualification. Theses course often run subject numbers of people attending the course so fingers crossed there will be sufficient numbers for the September course to run.
Posted by Susan at 09:37 2 comments: 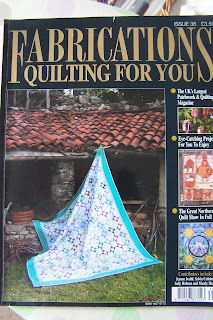 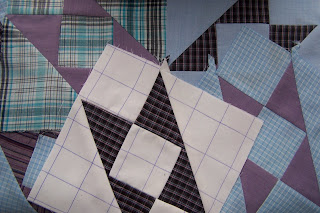 Hurray!!! At last I have managed to get some sewing done. I have been consumed with other events in my life over the past few weeks and have had little time for anything else. However, I managed to get two full days of sewing this week. Firstly I finished my courthouse steps for my Log cabin stripy appliqué quilt, alas I am stuck on the flower block (hmmmm need Janet's help me thinks?). Being stuck on one quilt I needed something new to sew? Several years ago I started collecting checked and stripes shirts from family friends and some charity shops, to make a quilt I fell in love with in Fabrications magazine (issue 38 2005). I looked at the shirts I had recently acquired and decided that was my next project. I pulled out the magazine and got stuck in. I have made 50 6" blocks out of 168. The block is called Jacobs ladder. Jacobs ladder is from the book of genius and the story is as follows: Jacob left Beersheba, and went toward Haran. He came to the place and stayed there that night, because the sun had set. Taking one of the stones of the place, he put it under his head and lay down in that place to sleep. And he dreamed that there was a ladder set up on the earth, and the top of it reached to heaven; and behold, the angels of God were ascending and descending on it! And behold, the Lord stood above it [or "beside him"] and said, "I am the Lord, the God of Abraham your father and the God of Isaac; the land on which you lie I will give to you and to your descendants; and your descendants shall be like the dust of the earth, and you shall spread abroad to the west and to the east and to the north and to the south; and by you and your descendants shall all the families of the earth bless themselves. Behold, I am with you and will keep you wherever you go, and will bring you back to this land; for I will not leave you until I have done that of which I have spoken to you." Then Jacob awoke from his sleep and said, "Surely the Lord is in this place; and I did not know it." And he was afraid, and said, "This is none other than the house of God, and this is the gate of heaven."
Afterwards, Jacob names the place, "Bethel" (literally, "House of God").
Posted by Susan at 08:44 5 comments: